Who makes a good Hurricane Hero?

If you are an ATCO, Airport manager, work in airport ops, an FBO, for a local operator, or otherwise have knowledge of what’s happening on the ground – you can help to get that information out.

We are focusing on the Atlantic Hurricane season 2020. We especially would love your help if you are in the Bahamas, Turks, Cuba, Haiti, Dominican Republic, Puerto Rico, Trinidad, Jamaica, or any of the Leeward Caribbean islands.

We will only contact you if there is a major hurricane and we need information about your airport. Good information saves lives, and gets relief flowing more quickly. That’s our mission, and that’s how you can help.

Yes! I want to help.

What information is useful?

In routine operations, aircraft operators have a bunch of ways to get the latest information. Technology works pretty well. We can use NOTAMs, see the latest arrivals and departures online, get the latest met reports, and have any questions answered quickly with a phone call or email.

When a hurricane hits – that changes immediately and drastically. No NOTAMs, no weather reports, and nobody to ask – no working emails, no landlines. There is little to go on, if anything.

So, how do you get information on the airport in the hours and days after a hurricane? That’s a surprisingly difficult question to answer, and based on the evidence of Hurricane Dorian (2019), we definitely haven’t figured it out yet.

Why does it matter? Relief is critical, and aviation plays a big part. But before a single aircraft can get airborne, the operator needs to know some basic things:

– Is the airport open? Are roads open?
– What condition is the runway in? How about the ramp?
– Is there fuel available, and has it been checked for contamination?
– Is there an Air Traffic Control service?
– What cargo offload equipment is there?

If we can get this knowledge out to relief organizations, airplanes can fly in faster.

The danger of bad information

There’s only one thing worse than no information, and that’s bad information.

On Wednesday, Sept 4th, 2019, two days after Dorian, the aviation community was waiting for information on the status of Freeport, Grand Bahama. The airport is critical to the island – it’s the only one capable of handling relief traffic.

Unfortunately, the first people to get news out were CNN. In a piece titled “Bahamas airport destroyed by Hurricane Dorian“, the reporter showed how the airport was “gone”. 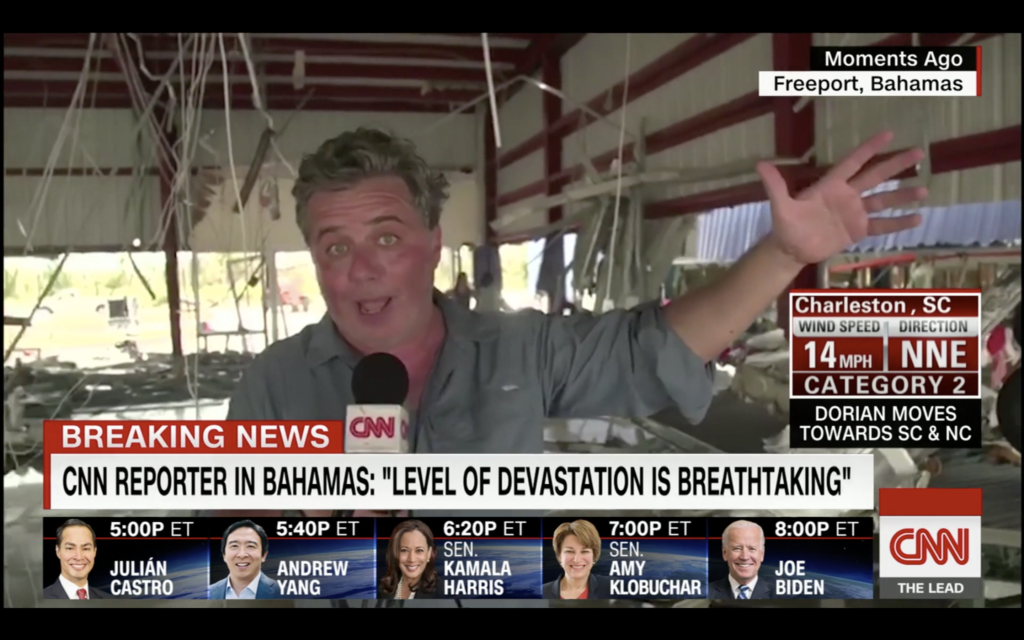 For the news media, details don’t matter so much – their aim is to get eyes on the piece, and the more dramatic, the better. For aviation operations, details are critical. And so, relief efforts were delayed because the message from CNN was “The Airport is Gone”.

What CNN depicted as the “International Terminal”, was a hangar belonging to Western Aviation. The International Terminal was definitely damaged, but standing, and nothing like what was shown. The runways were in fact fine, and there was just some debris on the apron. There was even ATC.

The problem was just that nobody outside the Bahamas knew that.

Yes! I want to help.